The web build may experience issues on some computers - we recommend trying a downloaded version to make sure the game runs smoothly.

This is a proof-of-concept of an rhythm game with minimal visual indicators. In order to score well, you need to pay attention to the beat and hit on the "clap"; watching for the visual cue will almost always result in a lower score, so you'll have to anticipate the timing and listen carefully to do well.

Our goal was to create a rhythm game in which the score was based on the player's ability to lock in to the pulse, and not their reflexes or ability to track visual patterns. The drum groove includes syncopations and changing subdivisions, making it increasingly difficult to keep up perfect timing.

The audio for this demo is a transcription of this video of Nate Smith, which we highly recommend watching for context. The gameplay attaches a score to what the audience does in the video, but uses a transcription instead of original audio (to ensure the "claps are evenly spaced).

For anyone struggling: if you can consistently score points on each "clap," you're doing relatively well, particularly if you can keep that up near the end! Point scores drop off very quickly if you're not exact, so it's fairly difficult to keep getting "perfect"s. A final score above 3000 is good, and anything above or near 4000 is fantastic.

It's also worth noting that this is a proof-of-concept; the code doesn't take into account input delays or other factors that might come into play for a web build. Try the download version if you're having latency issues.

If there's any interest, we'd consider developing this idea further. A full "Rhythmic Illusions" could be used as a rhythm training exercise for musicians, or could make a fairly unique and difficult rhythm game for more casual players.

Original Audio by Nate Smith (seen here; he isn't affiliated with this game, we just really liked this performance!) 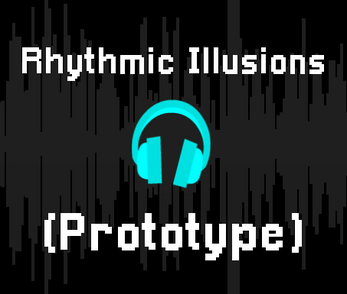